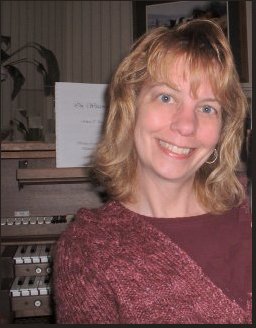 Deborah Krauss Smith has served congregations of varying denominations as a church musician for over 40 years. Having worked most recently as Organist/Director of Music Ministries at St. John's United Church of Christ in Monroe Wisconsin, she has served other churches in Monroe, Eau Claire, and Madison. Besides being an organist and area organ recitalist, her work has encompassed establishing and directing church music programs that included vocal choirs of all ages, handbell choirs, instrumentalists, soloists and ensembles, and writing/arranging music for those groups. In 2012 and 2014, she had the privilege of leading Madison Symphony Orchestra-sponsored hymn sings, playing the Klais organ in the Overture Hall of the Overture Center for the Arts in Madison, WI. In years past, she has also worked as a public school music specialist, a choral/vocal and instrumental accompanist, maintained a private piano/organ studio, and did adjudicating for the Wisconsin School Music Association.

A summa cum laude vocal music education graduate of the University of Wisconsin-Eau Claire, Deb has a double applied major in both organ and voice, having begun organ studies in Monroe with the late Merruth Seaton, continuing with Jerry Evenrud and David O. Parsons while at UW-EC, and then for many years with the now late Lawrence G. Kelliher, formerly longtime organist/music director of Bethel Lutheran Church in Madison, WI. A member of the American Guild of Organists (AGO), Deb is currently Vice-President/Madison Chapter AGO Subdean on the board of directors of the Madison-based Association of Church Musicians (ACM), and for many years has served as ACM's webmaster and e-mail database coordinator.

The granddaughter of Swiss and German immigrants to Green County, she has directed the Monroe Swiss Singers mixed choir since 1985 and the Männerchor New Glarus from 1995 through 2006. In 2003, she had the honor of being the Grand Concert conductor for the 37th Swiss Singing Festival and Competiton of the North American Swiss Singing Alliance (NASSA), directing over 300 voices comprised of members of Swiss choirs from the upper Midwest and Canada.

Deb and her husband, Greg, live with a collie named Duffy and an assortment of cats and pet goats on their 160-acre grain farm north of Monroe.


Homepage • About this Program • About Midday Masterworks 2020 • Request E-Notification